The port (code name “Mulberry”) is composed of large ships that were sacrificed and sunk, and of reinforced concrete (Phoenix) forming protective dikes.
Platforms and floating footbridges for unloading were installed inside this shelter in just 10 days.

60 years later, Michel Brissard discovered that the floating footbridges used for landing had been stocked in government warehouses in the Indre and Loir region since 1944.

Abandoned and destined to be used for scrap metal, he had them brought back to where they had first been assembled, in front of Omaha Beach.

5 footbridges have been reinstalled at the site of Vierville sur Mer.

The association “The footbridges of Omaha” was created in 2004 by Michel Brissard and has been in existence for over 10 years.

The members of the association take part in various events during ceremonies or anniversaries. They participate in the maintenance of the footbridges and assist with administrative duties in order to ensure their protection. 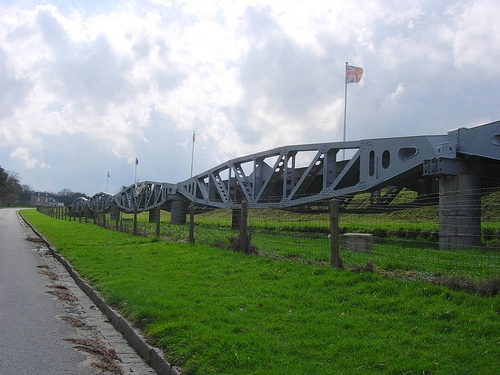